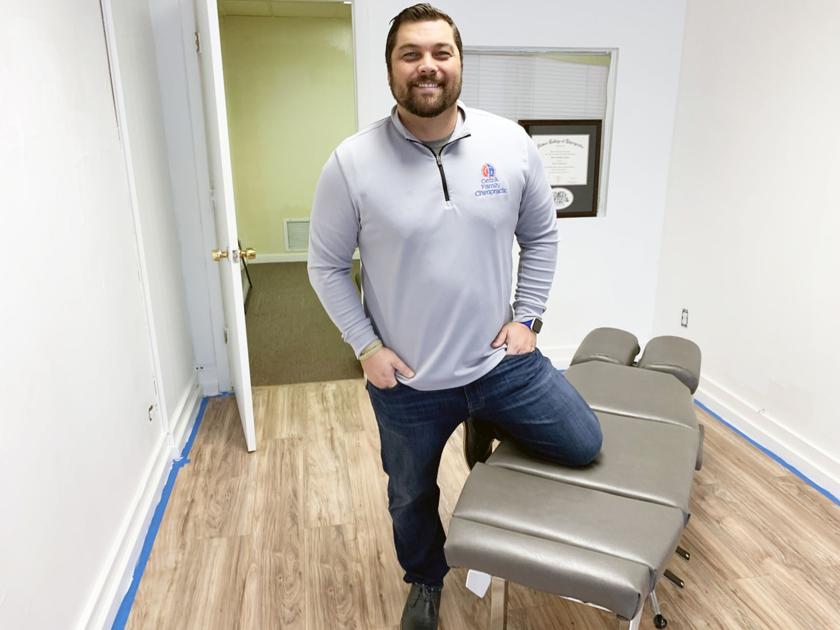 Dr. Stefan Getzik celebrated a personal and professional homecoming last March 2, when he opened a chiropractic practice in downtown Washington.

A South Strabane Township native, Getzik had practiced in Ohio for three years before returning to reestablish himself locally. Getzik Family Chiropractic launched at 117 N. Main St. on that late winter day, and was just gearing up when the pandemic began to ravage the region two weeks later.

COVID-19 has had a deleterious effect on countless businesses, to be sure. But, apparently, not to the one next to Joe’s Bakery.

So good that the practice is moving to a larger location a short distance away.

People may get bent out of shape over the coronavirus or the weather, but Getzik plans to help them readjust now, at the current space, and in a few weeks at 70 E. Beau St., Suite 100, in the city.

Getzik plans to relocate there Feb. 25 and begin seeing patients March 1 – almost one year to the day he started out on North Main.

Space, he said, is the primary reason for the switch. The clinic will have more room, inside and out, at the East Beau site. The building will accommodate two adjustment rooms, a large therapy bay, a massage room and a spacious waiting area.

A major difference, however, is Getzik Chiropractic will have an ample parking lot at the new site – he estimates about 30 spaces. That is a benefit the current practice does not have. Getzik said many of his patients now park at a meter along North Main, competing for spaces with clients of other businesses.

“This location isn’t big enough,” said Getzik, a North Franklin Township resident. “It has served its purpose, gotten us to where we needed to go. But now we’ll be able to accommodate way more people.”

Getzik has hired a front-desk employee and is looking for a massage therapist. For now, he is the only doctor on staff, but hopes to add one a year from now. He also plans to expand into Wheeling and eastern Ohio.

East Beau will be the fourth county location from which he has operated. Getzik previously had facilities on South Main Street in Washington and in North Strabane Township.

For now, his focus is on Washington. “We decided to commit to being in the city for five years, to show the city we care about the people.”

Washington native Barbara Griffin has assumed another position of prominence in the Pennsylvania legal system.

The state Supreme Court recently appointed her chair of the Pennsylvania Lawyers Fund for Client Security Board, the first woman and African American so named. Griffin, an attorney who now resides in the Squirrel Hill section of Pittsburgh, has been director of the Allegheny County Bar Foundation’s Pro Bono Center since 2007.

“I’m honored to do this work on behalf of the citizens of Pennsylvania,” Griffin said in a news release from the bar association. “The Lawyers Fund for Client Security is crucial part of our legal system that helps protect those who have been wronged by attorneys they trusted to represent them.”

State Supreme Court Justice Debra Todd nominated her for a position on the board in 2018. Griffin most recently was vice chair of that board.

The fund was created in 1982 to reimburse clients who absorbed losses due to misappropriation of funds by Pennsylvania attorneys.

Sheleta Camarda-Webb has been a fixture at California University of Pennsylvania for more than three decades. She was awarded a bachelor’s degree in social work and a master’s in secondary education/social science by the school, and has been employed there since 1991.

On Monday, she will become a member of the executive leadership team as she takes over as interim chief of the Office of Diversity, Equity and Inclusion at the school.

Camarda-Webb has served in a number of areas at Cal U., including student affairs, residence life and diversity education. Her work has focused on LGBTQA+ issues, power and privilege, race and cultural identity.

She has been director of the university’s DEI Office since 2015, when it was known as the Office of Multicultural Affairs.

Attorneys W. Taylor Frankovitch and J. Mark Adkins, partners with the Bowles Rice law firm, have been elected to serve on its executive committee for four-year terms.

Frankovitch, based at the firm’s Southpointe location, focuses on energy, commercial law, real estate and litigation. Adkins, who works at the Charleston, W.Va., office, deals primarily with commercial litigation.

Managing partner Tom Heywood, chair of the seven-person executive committee, said the two were nominated and formally elected at the firm’s January partner meeting. The committee oversees operations of the firm and makes policy and other significant decisions.